Celebrities That Love to Clean 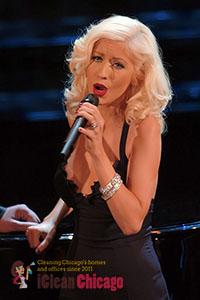 What is Hollywood obsessed with? Plastic surgery, glamor, dieting, money… cleaning. Yes, you read that right – cleaning! Some celebrities just love to clean even though they can afford to hire an army of maids. They all have their reasons for it which often include:

No matter what inspires celebrities to be clean freaks, it is always nice to hear that even the rich and famous walk around in their home with a mop in hand.

Singer Christina Aguilera may look like a diva, but she is not afraid of breaking a nail to keep her home clean and neat. The singer has shared on numerous occasions that she likes to vacuum around the house. In fact, her obsession with cleaning has inspired her son’s first words – “vacuum.” Similar to his famous mum, Christina’s young child loves to clean and he has already learned how to dust the shelves.

Legally Blond actress, Reese Witherspoon, insists that her obsession is not so much related to cleaning, but more to keeping things organized. Although she uses the services of housekeepers, Witherspoon reportedly does not leave a lot of work to them since she sanitizes her house on regular basis. Every now and then, she likes to take her time reorganizing drawers and shelves around her home just for the fun of it.

Similar to Witherspoon, singer Britney Spears also has a maid. However, Spears has actually asked her housekeeper to leave certain aspects of the cleaning process to her. She is reported to particularly enjoy dusting. Britney keeps her home free of any clutter. In the rare occasions when things get messy, the singer would not leave the house before she cleans it to perfection.

An unusual way to fight stress

Supermodel Gisele Bundchen uses cleaning as a form of therapy. The runway beauty claims that doing work around the house has an incredibly calming effect on her mind. Bundchen’s only regret is that she got to discover that strange fact about herself only after she became a mother. Well, better late than never, right!

Just like Gisele Bundchen, actress Helena Bonham Carter views her passion for cleaning as a therapy. She has admitted that whenever she feels stressed or worried, she treats herself by sanitizing her entire house. The actress even encouraged her fans to try her cleaning therapy instead of wasting their money on shrinks. One of Helena’s favorite activities is cleaning her oven. In fact, the actress believes she has a special gift for it.

Iconic soccer player David Beckham suffers from OCD or Obsessive Compulsive Disorder which has made him very tidy. He likes to keep an even number of products in his fridge all of which have to be arranged by color. Apart from being extremely organized Beckham also has certain rules when it comes to cleaning. For instance, he tries to vacuum only in straight lines, following the texture of the carpets. The soccer player even hired a housekeeper who used to work in the Buckingham Palace.

So, under which category do you fall?